Skip to content
Behind the scenes at dock10, the home of Eurovision, Naked Attraction, World Cup 2022 and Stephen Fry’s Dinosaur

Behind the scenes at dock10, the home of Eurovision, Naked Attraction, World Cup 2022 and Stephen Fry’s Dinosaur

This article is originally published on Prolific North.

Stroll through the piazza of MediaCity – where broadcasting giants BBC and ITV have cemented Northern bases – and you’ll find dock10, home to popular long-running TV and game shows including Match of the Day, Countdown, The Voice UK and BBC’s University Challenge. 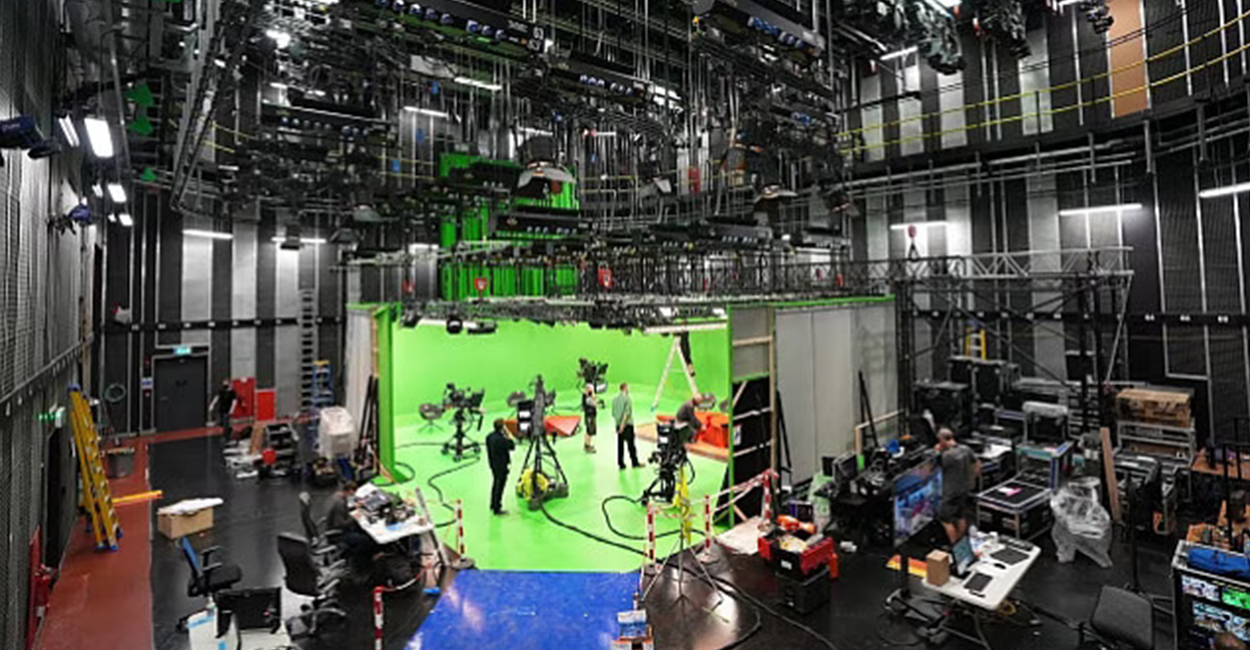 Officially opened by The Queen back in 2012, dock10 has since established itself as a major television facility on a mission to elevate the future of TV through its virtual studio technology.

As football fans eagerly anticipate the FIFA World Cup later this year in Qatar, dock10 has revealed it will be working with BBC Sport as the broadcaster dives into its coverage.

“We’ve got a big focus on virtual production at the moment because that’s something where we think we can add a lot of value. We have the World Cup around the corner, which we will be playing an important part for with the BBC,” Andy Waters, Head of Studios at dock10, told Prolific North.

“Working with BBC Sport to do the World Cup is something really that we’re delighted to be involved with.”

At dock10’s high-tech virtual studios, productions were able to navigate travel restrictions posed by the pandemic with continued coverage of some of the biggest live sporting events, from Euro 2020 to the Tokyo Olympics. 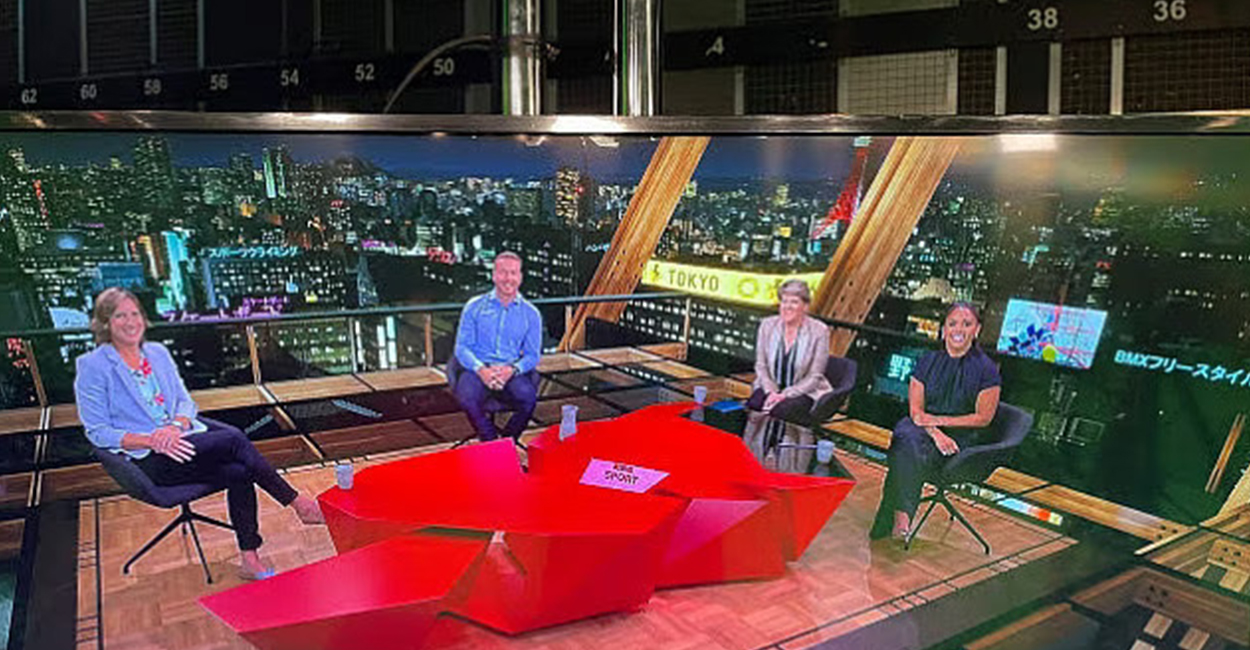 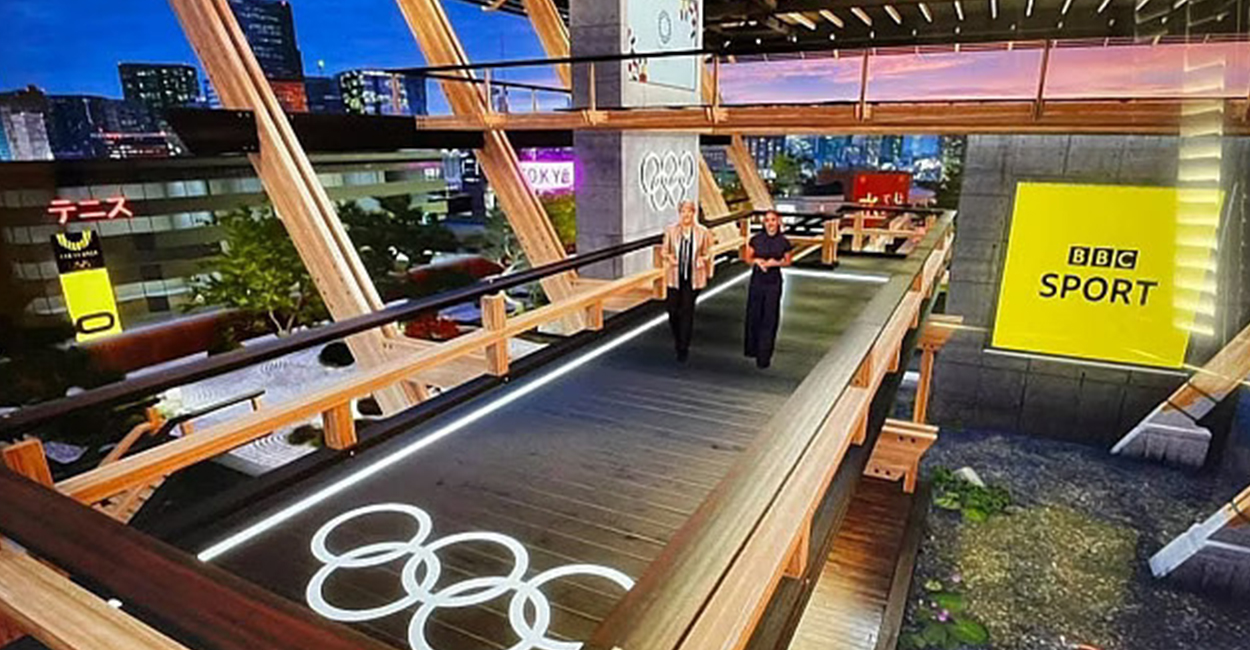 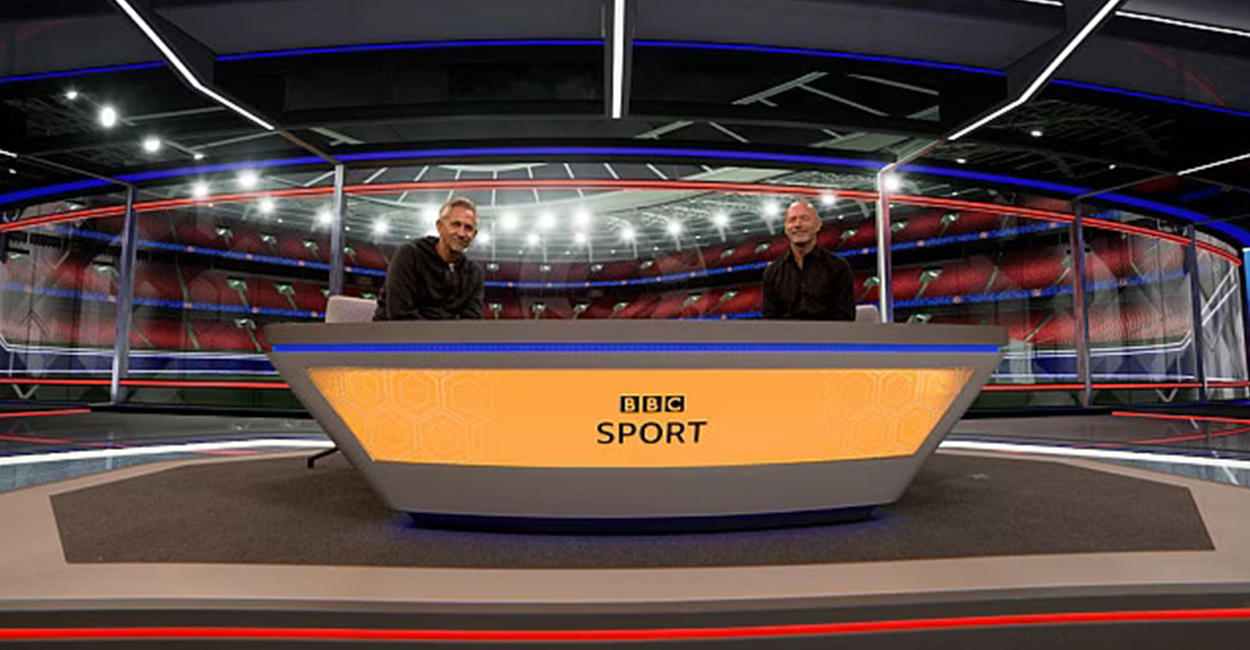 Just tune into an episode of Match of the Day with Gary Lineker and you’ll see dock10’s virtual studio technology in action, where the screens and even the on-set shadows have been created virtually.

“We’re four years in now using this technology before we launched [with] Match of the Day in 2019,” he explained. “It’s just another tool for storytellers. Whether that’s a game show, a comedy show or any form of entertainment, it’s another tool for them to be able to help tell that story.”

Dock10 embraces innovation and works closely with productions to bring their visions to life – whether that be for the creation of robot presenters to roaming T-Rexs.

During the peak of the pandemic, the BBC approached dock10 to use its virtual technology to help support children, parents and teachers stuck at home under the lockdown restrictions.

It led to the creation of robot presenter CLOGS for Bitesize Daily, a programme for BBC Education, which blends the real-time rendering of the augmented reality (AR) character into a virtual set. 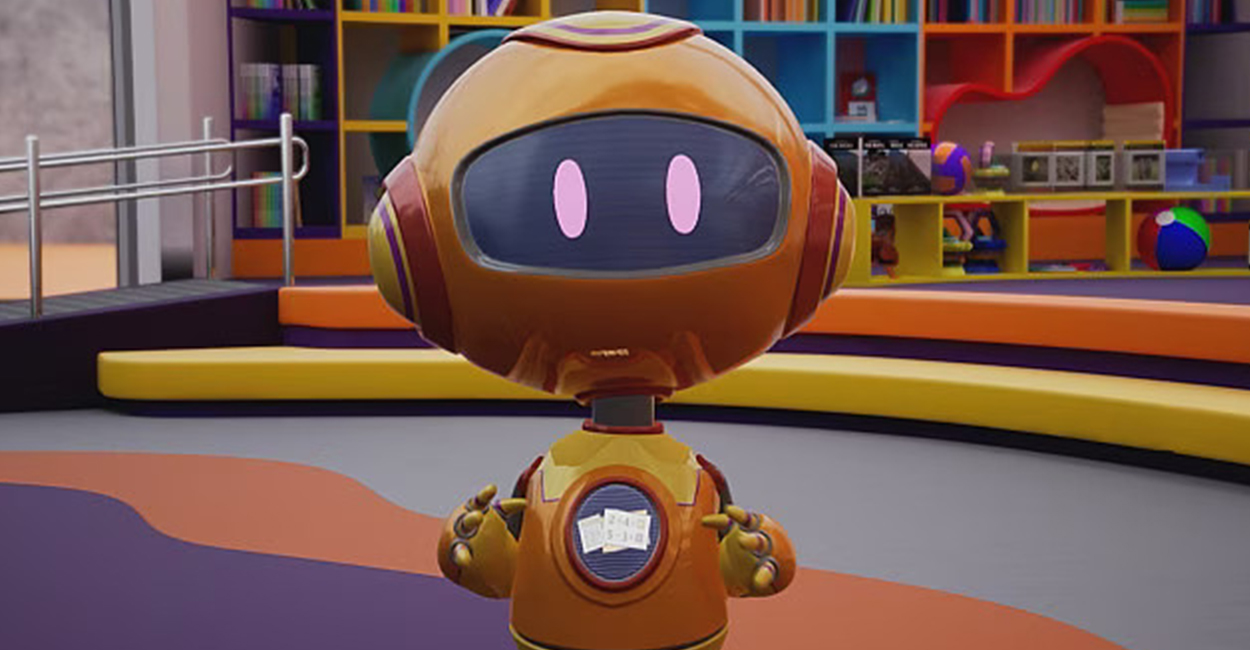 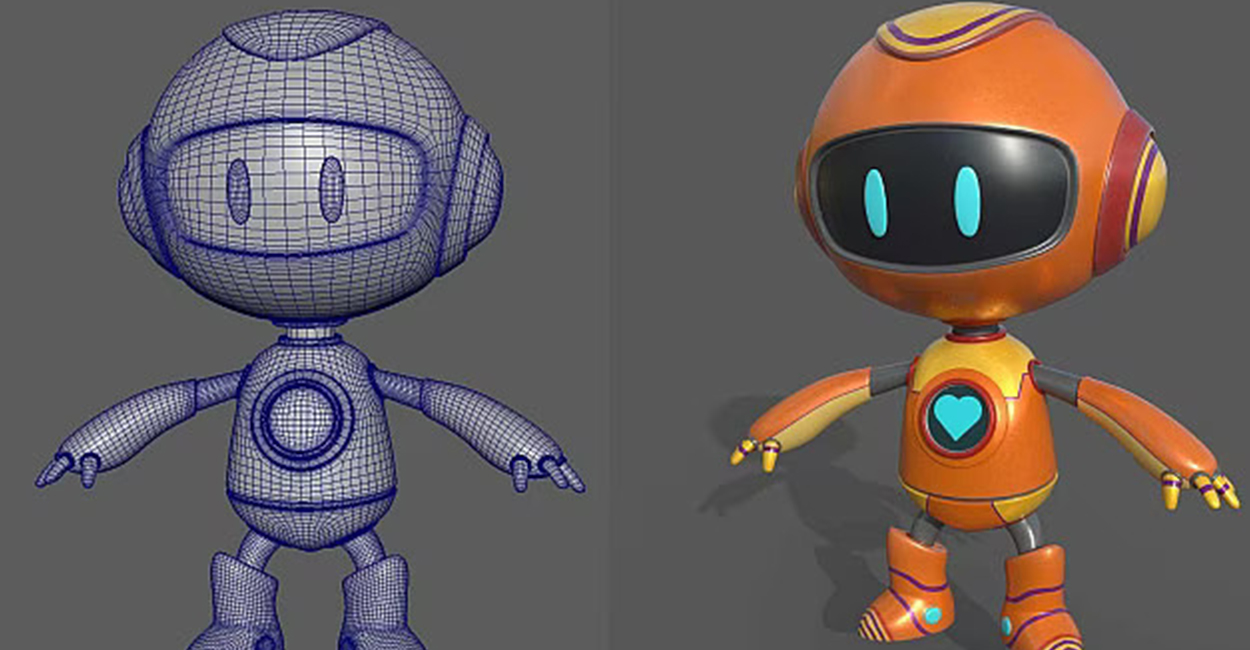 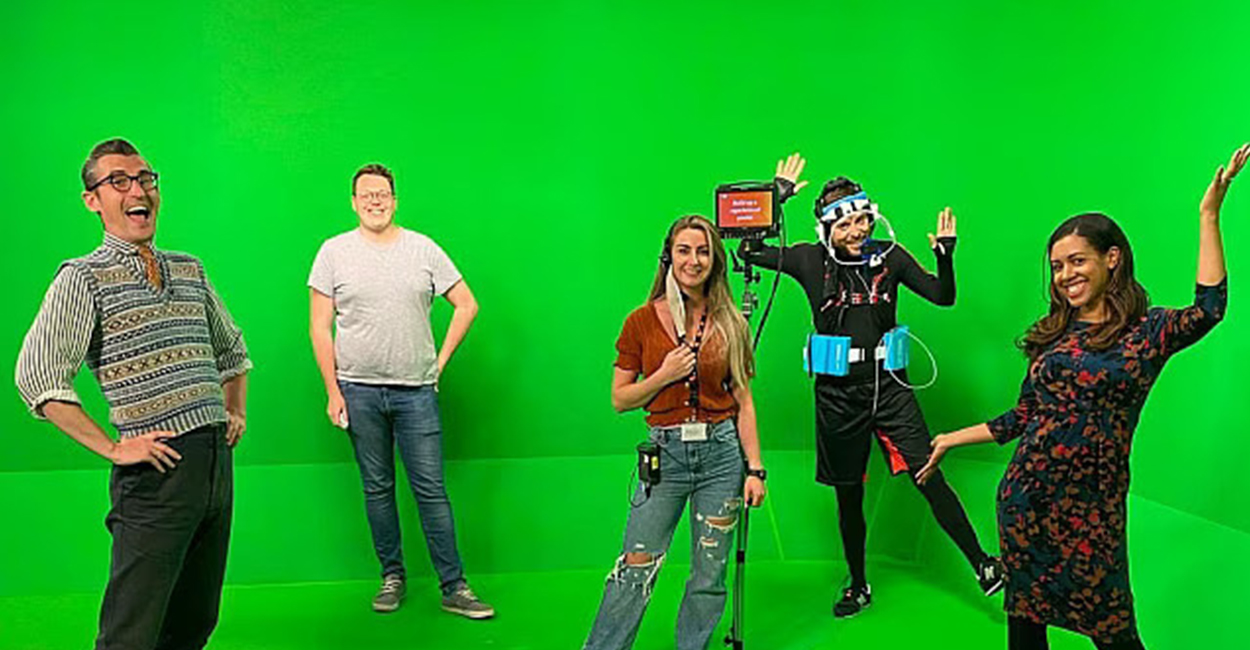 To demonstrate how CLOGS works, I was introduced to dock10 employee Luke who – picking the short straw on a warm day – was wearing a full-body motion capture suit and helmet linked in with facial-capture software to track anything from an eyebrow wiggle to a wink.

Initially starting out just with building a virtual set, the team at dock10 created CLOGS in just eight weeks from design to testing. As the character continues to evolve, the team can adjust the robot star to fly or make him bigger, all in real-time for the show.

The virtual sets are made in 3D creation tool Unreal Engine which are then passed through to software called Zero Density, managed by the team of virtual studio developers and operators at dock10.

The technology at the virtual studios is completely different to the motion capture suit and the technology behind the character, explained dock10’s Head of Marketing, Darren Deans.

“The team had to innovate the way that they actually merged together to create the real time on-air experience,” he said.

Pushing the boundaries of virtual technology doesn’t stop at AR characters in virtual sets for children’s TV shows or sporting events – the technology has the ability to captivate audiences at a much deeper level.

Stephen Fry has recently wrapped up filming for Dinosaur, a new four-part factual series for Channel 5, based in the same virtual studios CLOGS. 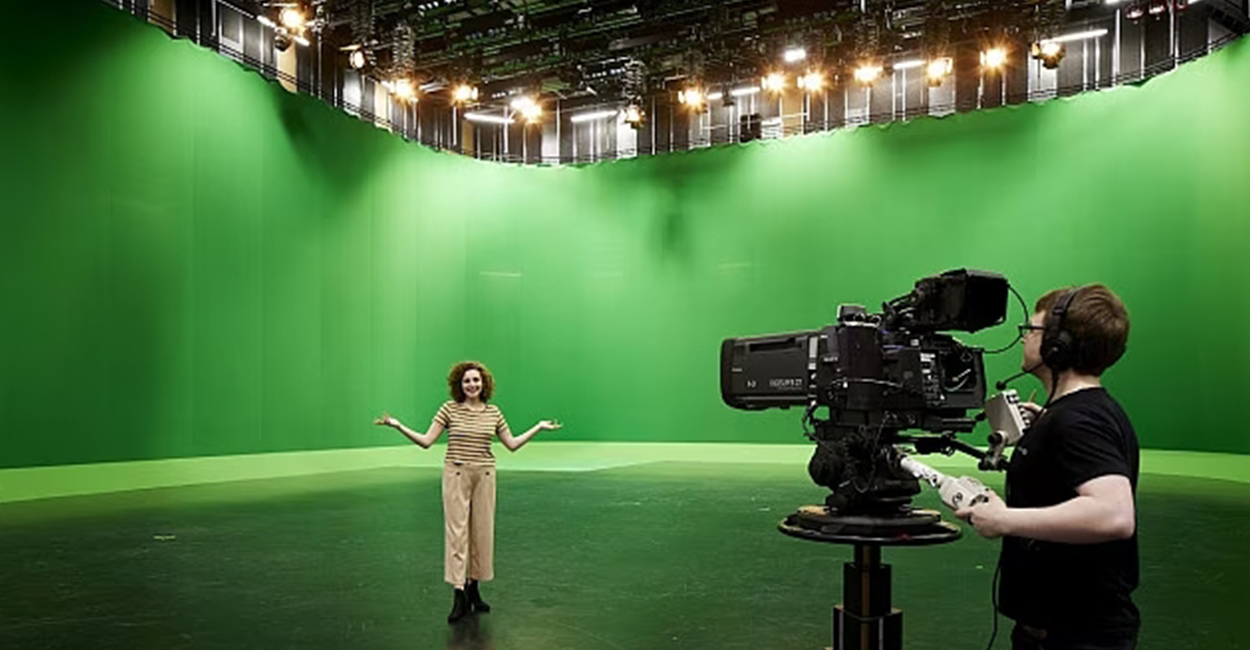 Working closely with paleontologists and scientists from the Natural History Museum, dock10 crafted an immersive 360-degree dinosaur world so Fry could interact with the dinosaurs whether it be weaving through Jurassic jungles to dodging a roving herd of Diplodocus.

“Unfortunately, we couldn’t find any photographs,” Waters teased. “So we did have to rely on their paleontologists.”

The immersive dinosaur world and species within it was brought to life by animators at dock10, which was constructed through a mixture of research and agonising detail right down to the scales on the dinosaur’s skin.

One of dock10’s floor managers ran back and forth with a ball on a stick to mimic a T-Rex for the show, Hannah Robinson, Production Development Producer at dock10, jokingly recalled during the demo of the virtual studio.

“We were really proud to work on that show. It’s from the same team using that same technology, getting really intimate and understanding what you can use that technology for and get the best from it,” said Andy Waters.

Through what appears to be an endless maze of corridors and studio space at dock10, the atmosphere is electric with creativity in almost every corner we explore.

I spotted those Naked Attraction frosted booths which have undoubtedly seen it all, ventured around the sets of Countdown and Match of the Day and had a sneak peek of drag queen icon RuPaul’s adaptation of the game show Lingo preparing to snap into action. 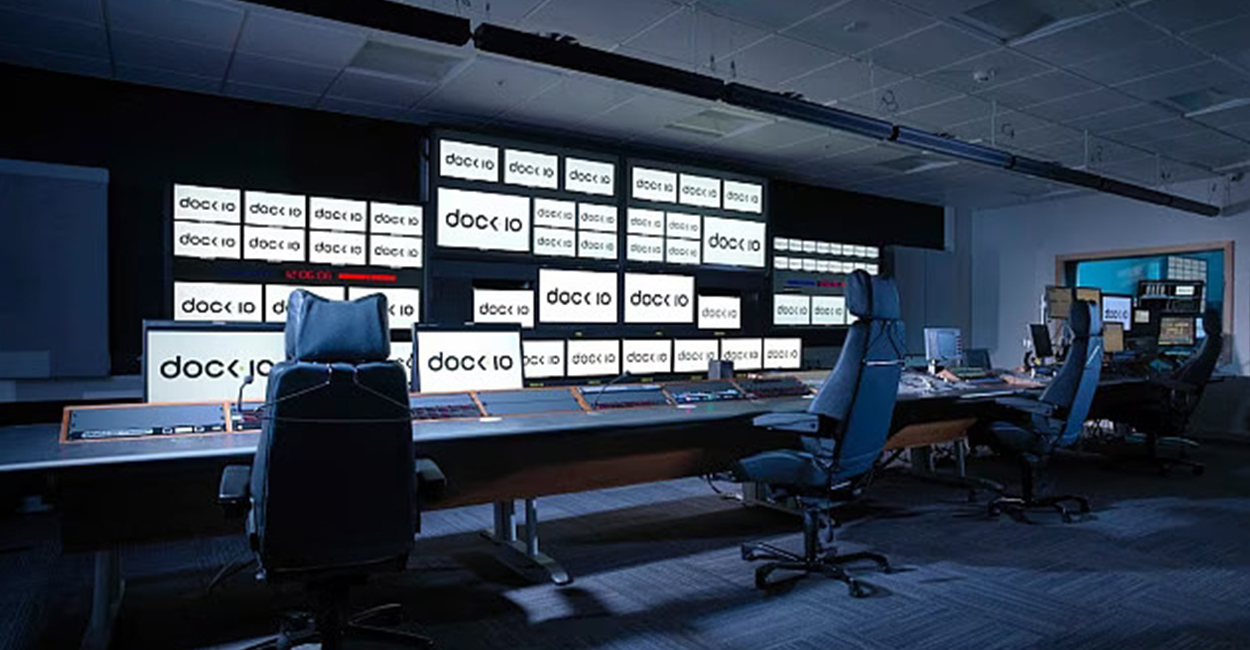 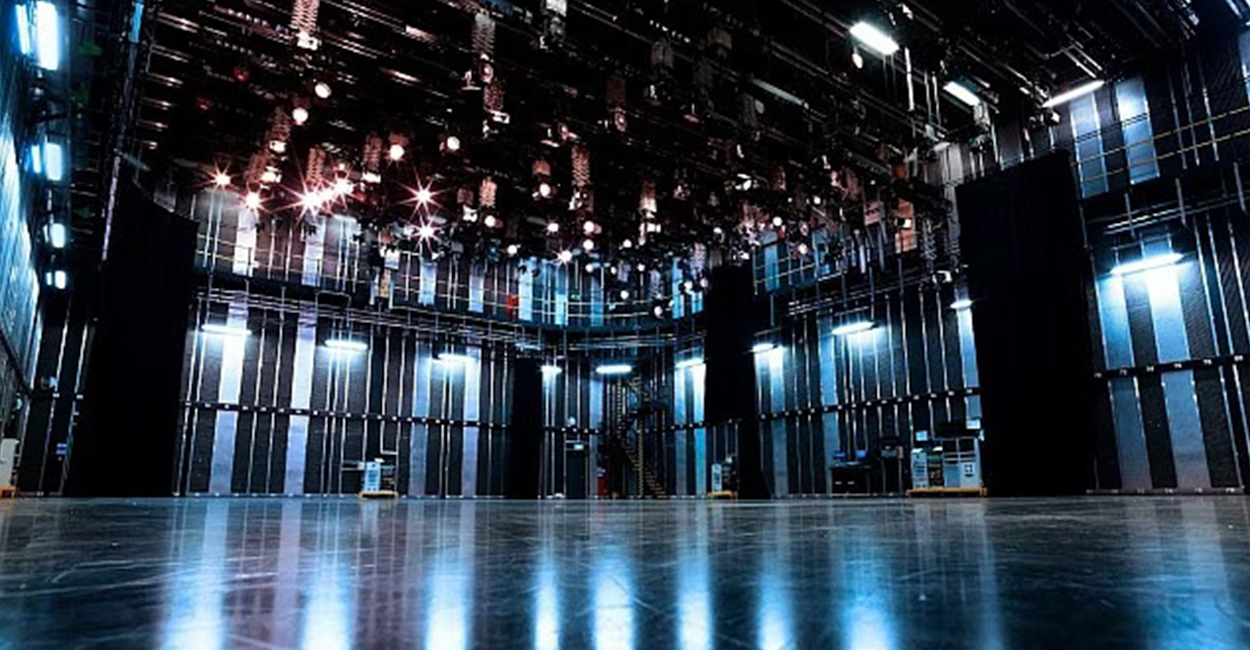 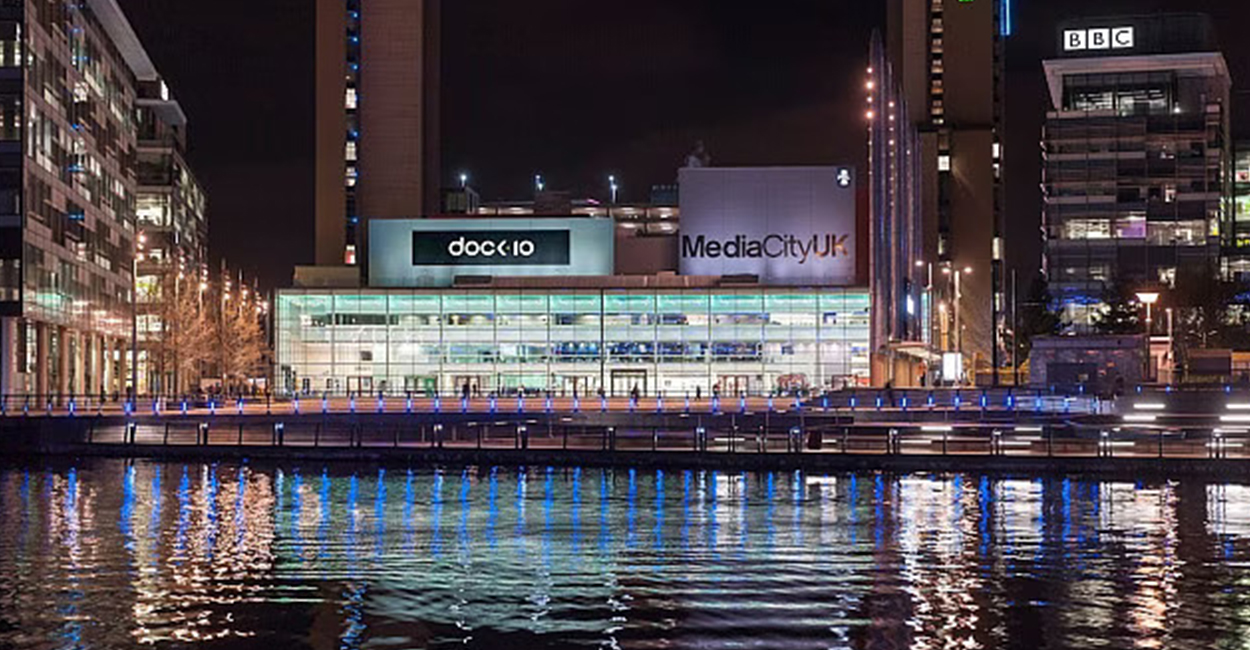 “If you just look at the range of stuff we get to do, everything from Crackerjack to Naked Attraction, The Voice, Sports Personality of the year, Blue Peter including its 60th anniversary to the Queen coming to open our facility – it gives everyone a bit of a thrill, a bit of a buzz, just the sheer breadth of the sorts of productions we do,” beamed Andy Waters.

Placing the North of England firmly on the map, the UK’s production of Eurovision was also broadcast from dock10 for the first time this year.

It wasn’t just about knowing the iconic sentence ‘Good Evening from Salford’ would be blasting out from TV screens across Europe amid a sea of glitter, it took lots of planning behind the scenes for just those few minutes you might have seen on screen.

It takes at least a week to prepare for the broadcast of the results, with the UK jury hidden away in a secret location at dock10 to ensure their decision-making isn’t influenced in any way through separate feeds without commentary. 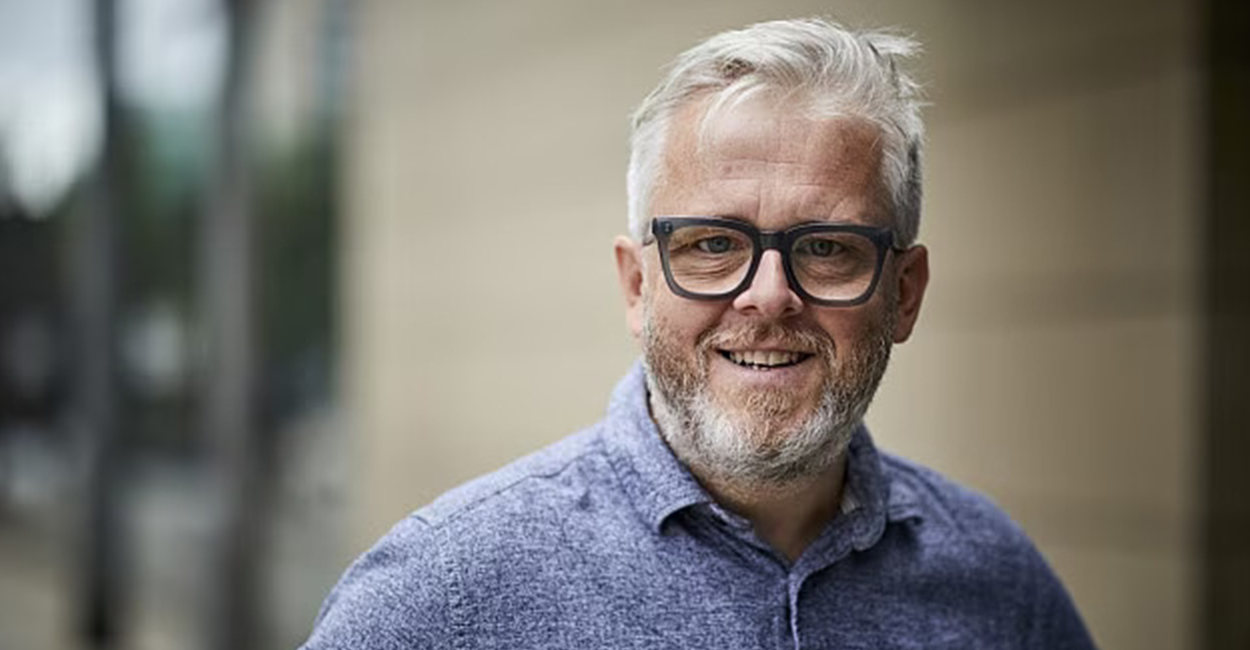 “It’s quite an operation,” said Waters. “The whole feed from Europe comes via dock10. It doesn’t get transmitted from Europe, it goes through the UK so there’s a lot of technical facilities added on to that feed and support.”

But the pressing question, will the Eurovision results be announced from Salford next year? “The plan was that they were going to be in dock10 next year and we’ve got it penciled in. I think the only thing which might have scuppered that now is the fact that we’re now hosting in the UK,” he said.

The European Broadcasting Union recently revealed that the UK will now take the place as host of the contest next year, of which five Northern cities are currently eyeing. Today it was revealed that dock10 will be involved with the UK production of the Junior Eurovision Song Contest.

“They may choose to do that [the results] in a different way. So we’ll definitely wait and see.. the jury’s out as they say!”

“The BBC major events team that are going to be looking after this are absolutely world class. Eurovision is in safe hands and obviously we will be very proud to support them again, if we can,” added Deans. 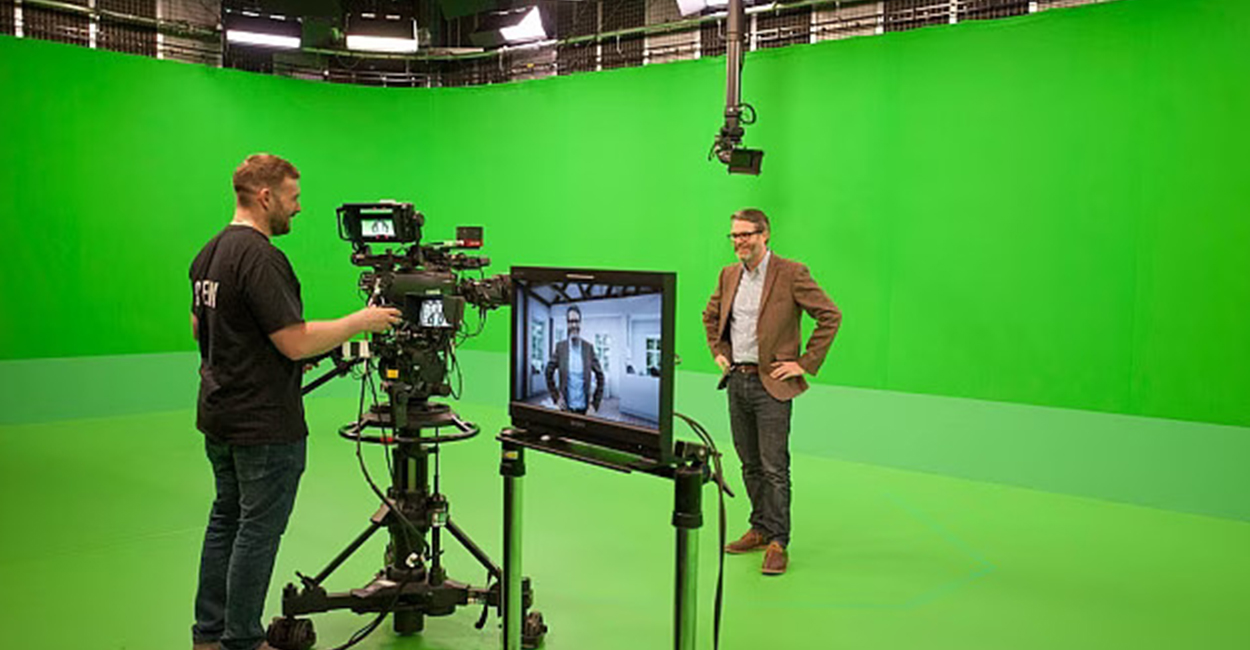 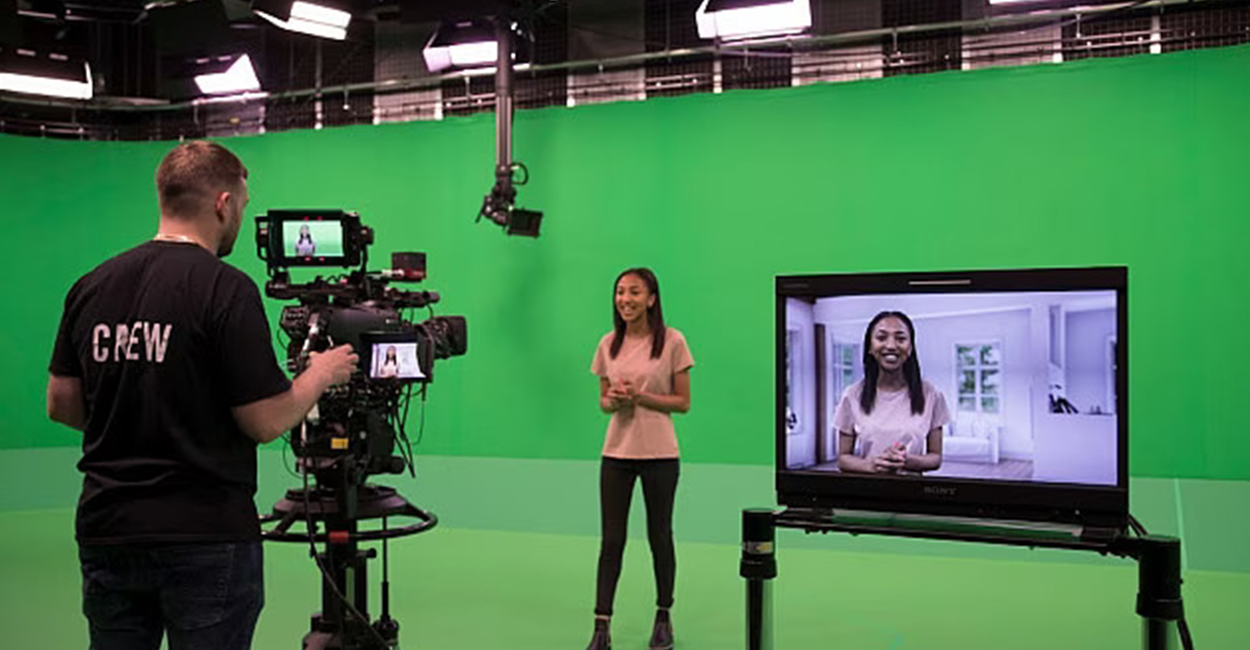 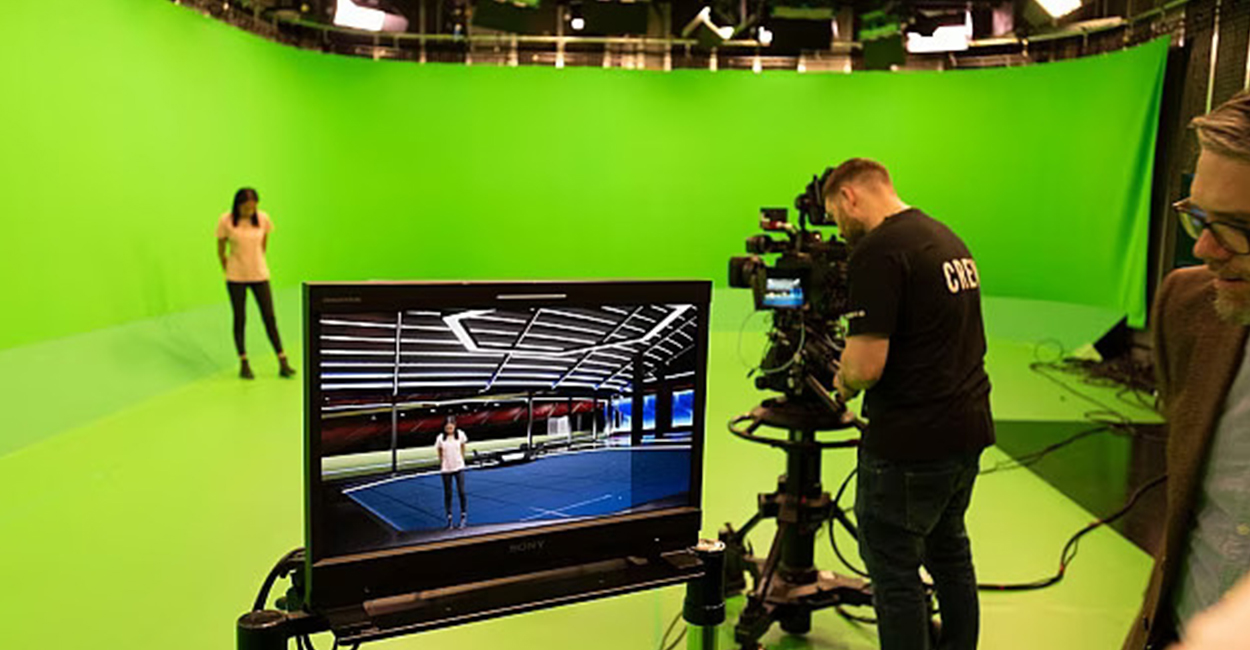 “Poor old David Cameron” and the future of dock10

Steering away from the Westminster media bubble, dock10 has also hosted multiple election debates over the past 10 years. On one occasion, all the major party leaders including the-then Conservative leader David Cameron headed to MediaCity, Waters recalled.

“We took out all of our superstar corridors, one for each of the leaders. There were probably about five or six of them visiting at the time and all the different parties were all perfectly happy with it. Then David Cameron arrived,” he said.

David Cameron’s security demanded for the card reader locks on the dressing room to be disabled “immediately”.

“We were like oh, if you want that lock to be permanently disabled, we’re not going to be able to do that in five minutes and he needs to go into the dressing room. So they refused to allow him to use his dressing room unless we could take that lock off the door immediately.

“All the other party leaders went to their dressing rooms and were quite happy but poor old David Cameron had to stand in the corridor and prep for his interview.”

As a diverse variety of shows have hailed from dock10 over the years, Waters believes the “power of virtual studios” will be a driving force for dock10’s continued path to growth.

He is keen to point out the benefits of embracing virtual technology within the entertainment world – whether that be for producers seeking to transcend their creative vision to cost savings.

“We’re now in a place where we’re doing so much of it, the team’s base knowledge around virtual studios is really quite high. That’s what’s allowing us to scale up and take the proposition to other types of clients.”

Working to solidify its status as a beacon for virtual technology solutions in the TV industry, dock10 has been working on a “stack of pilots” based around virtual production which will be delivered this autumn for various indies.

“Indies from all over the country are attracted up here because we’re leading the way,” added Deans.