*This article is originally published on film-tv-video

To take its corporate communications to a new level, sensor technology manufacturer IFM (own spelling: ifm) invested in its own virtual TV studio. This is now used for internal and external video productions.

The VR studio specialist KST Moschkau planned and implemented the studio from scratch. Cameras and mixers are from Panasonic, robots from KST, and Reality from Zero Density is used for real-time compositing.

The virtual studio was realized on the ground floor of the company headquarter, on a total area of approximately 150 square meters. About half of it is occupied by the actual studio, with L-shaped cove, green walls, green floor (green area: around 8 x 8 x 2.8 m) and the soft, diffuse KST studio light setup. Second, the detached room is the production (around 30 square meters), the rest is movement and storage areas. 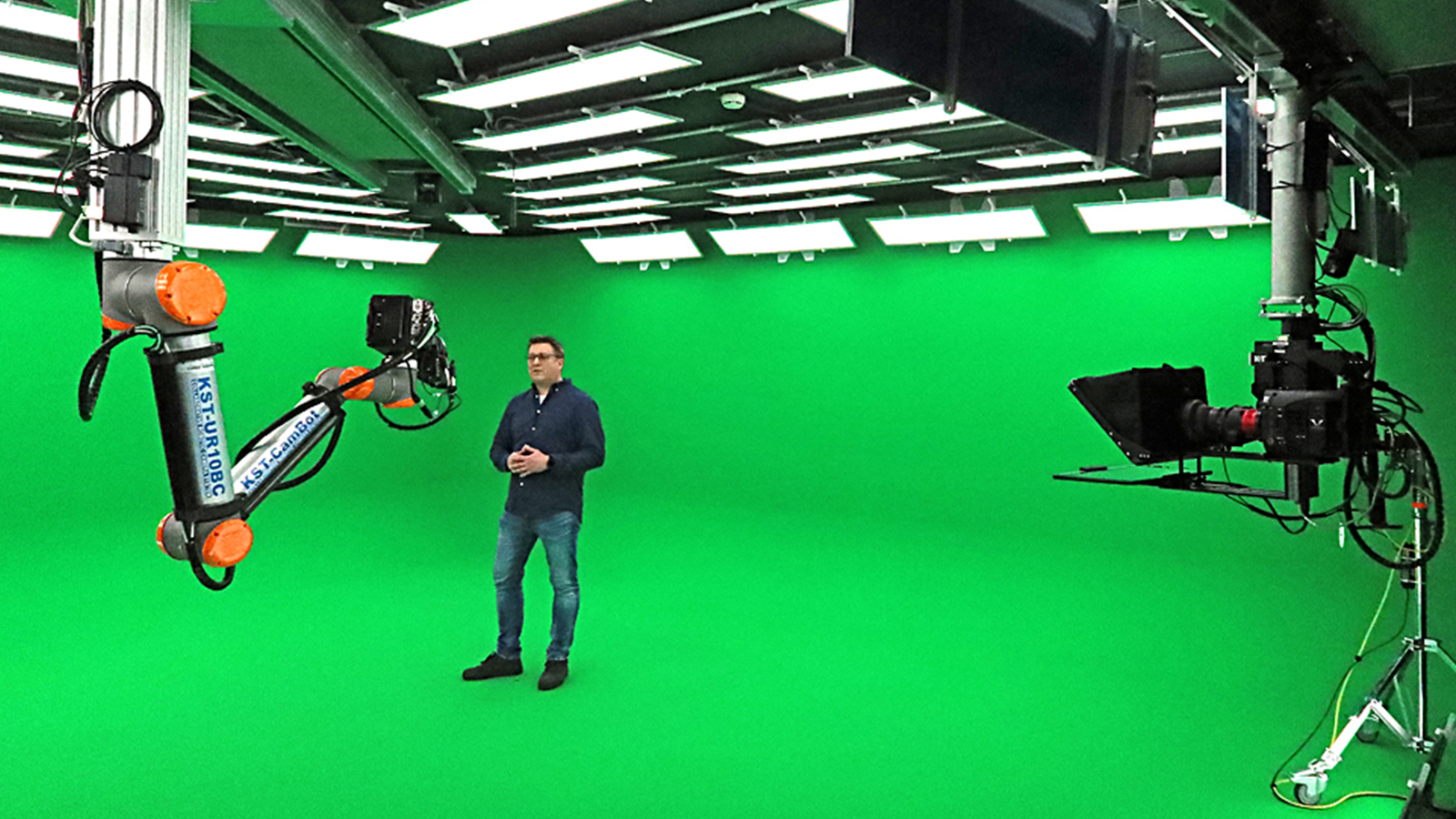 Hanging on the ceiling of the studio area are 33 super-flat LED area lights, 24 more shining laterally all around the studio area and another row providing illumination from the floor. There are additional mobile lights of the same type.

“With these, we create a super-smooth, even, almost shadow-free light, which allows us to shoot perfectly. Some people react critically to this concept at first, as it is very different from conventional, old-fashioned lighting. However, in our virtual concept, the overall image design no longer takes place in the studio, but directly in the real-time compositing system [Reality] of the production. We can create any conceivable lighting situation digitally and no longer have to move or reconfigure real spotlights, and of course, the grading of the camera images is also done automatically. So it’s a bit of an adjustment process,” explains Axel Moschkau, General Manager of KST. “The flat-designed LED area lights are very cost-effective compared to conventional lighting technology. So the lighting set allows us to take full advantage of the comparatively low room height here for a studio, while also easing the strain on the budget.” 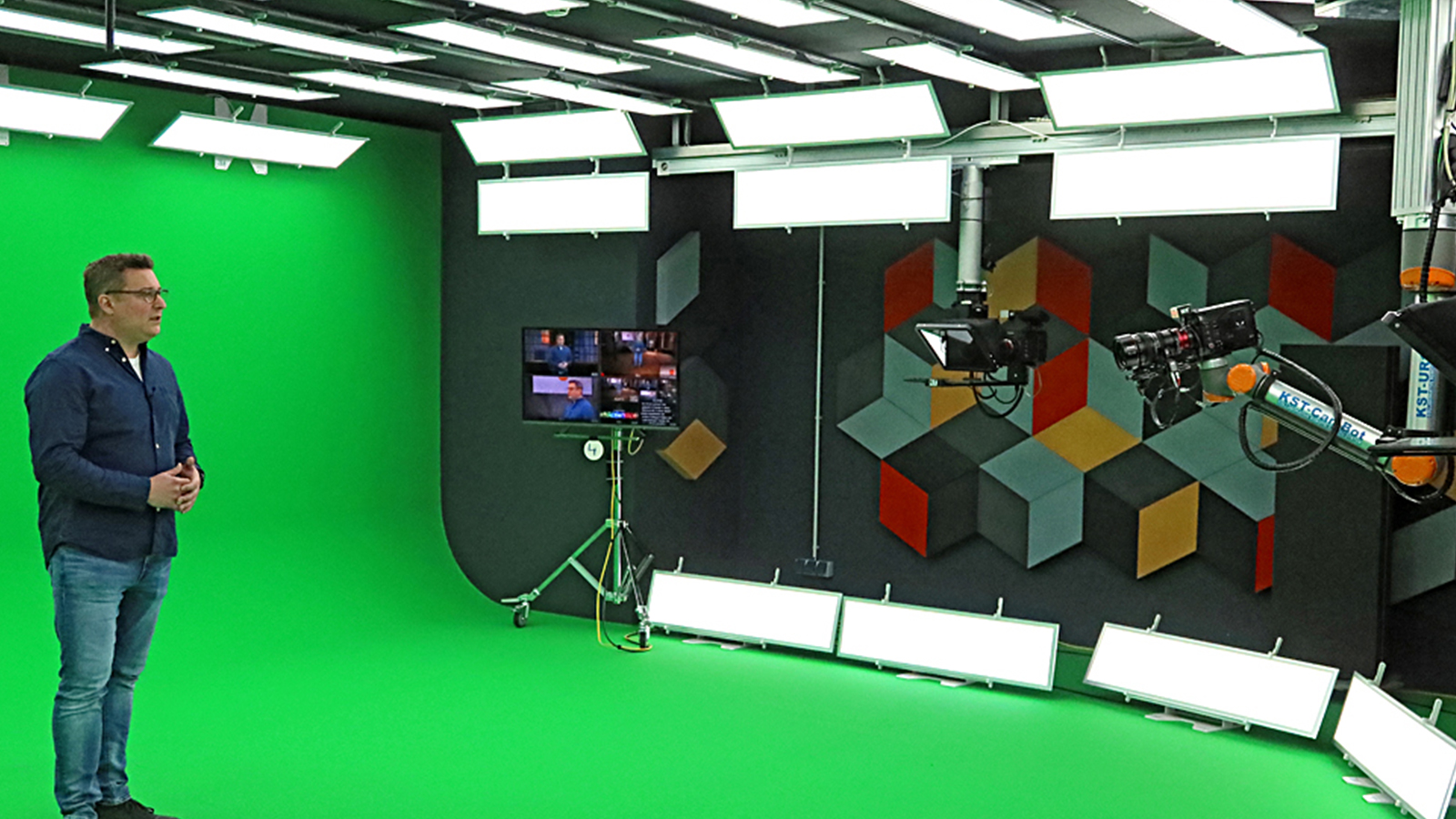 In addition, there is the fourth camera, mounted directly on the studio ceiling. This is a high-quality 4K PTZ camera (Panasonic AW-UE100KEJ). But the main cameras are of a completely different calibre: VariCams are installed on the CamBot arms (AU-V35LT1G).

“As main cameras, we use three Panasonic VariCam LT 4K cameras specially modified for robotics in combination with selected cine UHD zoom lenses from Canon. We use the cameras in interaction with Reality in raw mode and achieve extraordinarily good shooting results with outstanding image quality.” explains Axel Moschkau.

CamBot and VR Expert Felix Moschkau elaborates: “We have significantly advanced the CamBot development and incorporated many refinements in the production automation – among other things, we have now succeeded in making the rail systems for the robots much quieter. The absolute priority with such systems is, of course, safety, since after all, the robots are operating in the studio within a shared environment with humans. Sensors on the collaborative robots and many intelligent functions in the CamBot remote software ensure the highest level of safety here.”

Of course, not only “being seen” but also “seeing” is called for the studio: the studio is equipped with four 40-inch displays that are used for monitoring but also function as teleprompters. There is another dedicated teleprompter directly on the main camera. And of course, “listening” also plays a role: the microphones, sound transmitters, headphones and in-ear monitoring are all handled with components from Shure. In addition, there is also a powerful audio feed system in the studio.

All that is really needed in the studio are the people who act in front of the camera; everything else takes place in the production room. There, two people are enough to operate the studio completely. Because of the extensive automation, the studio is also ready for production within a short time, almost at the push of a button. Only more complex productions require additional staff in the production room, or they are called in remotely. Therefore, the studio can also be controlled from outside the building, if necessary.

“The remote production capability is already implemented in the studio concept and is therefore often another important argument in favor of this technical design. If necessary, production can be supported from the KST Innovation Center, for example, or even operated completely,” Axel Moschkau elaborates.

Dominik Stoecker, Corporate Digital Content Group Manager, thus also Studio Manager of IFM, explains, “A high degree of automation and low personnel requirements in operating the studio were very important to us. At the same time, we wanted to achieve the highest technical quality and a really convincing result.” 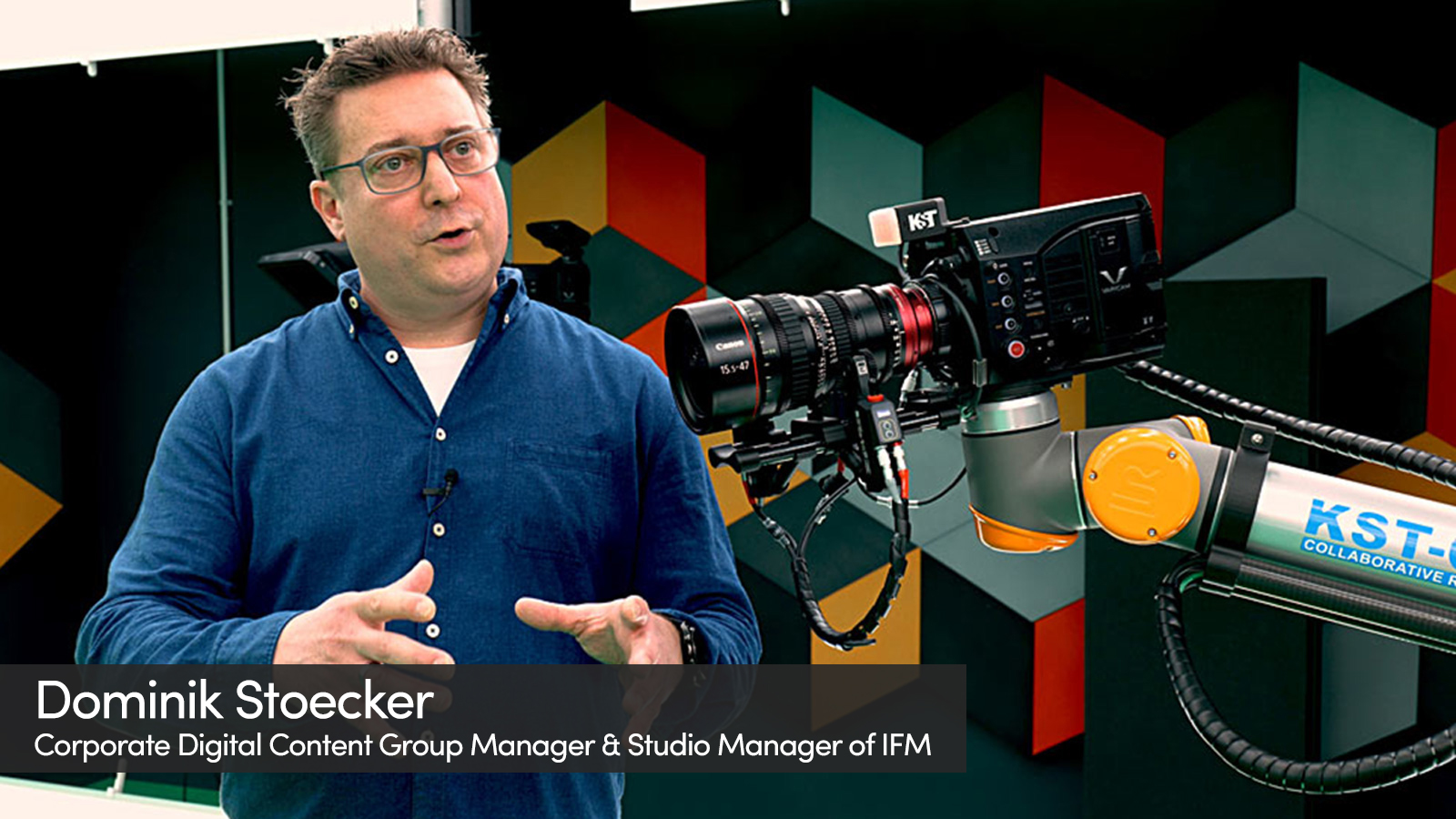 The cameras installed in the studio are the “eyes” of the overall system, while the production room is where, so to speak, the brain is located: it is only here that the finished image is created from the green screen recordings – and this refers to both the image design of the foreground and the computer-generated environment.

In an L-shaped studio furniture system from KST, the control panels, touch screens and PC displays are installed in the production room, and on the wall are three 65-inch 4K Oled screens combined as a Multiview video wall. Here, the control panel of Panasonic’s Kairos video mixer is particularly eye-catching. Behind it is a Kairos core with 4K option, ultimately this is the technical heart of the production room. Yet Kairos is much more than a mixer with an integrated router, explains Axel Moschkau: “In combination with CamBot, Kairos allows us to automate many other processes directly from the Kairos control panel – and thanks to the ST2110 architecture, we don’t need a separate 12G-SDI router.”

Reality Virtual Studio from Zero Density is in use. This system is based on various software components and three render Engines – one for each of the main cameras. In addition, there are other computers: a workstation for the graphic preparations and RealityHub. The control is done via browser from any PC in the network or directly from the automation module CamBot-Graphics. 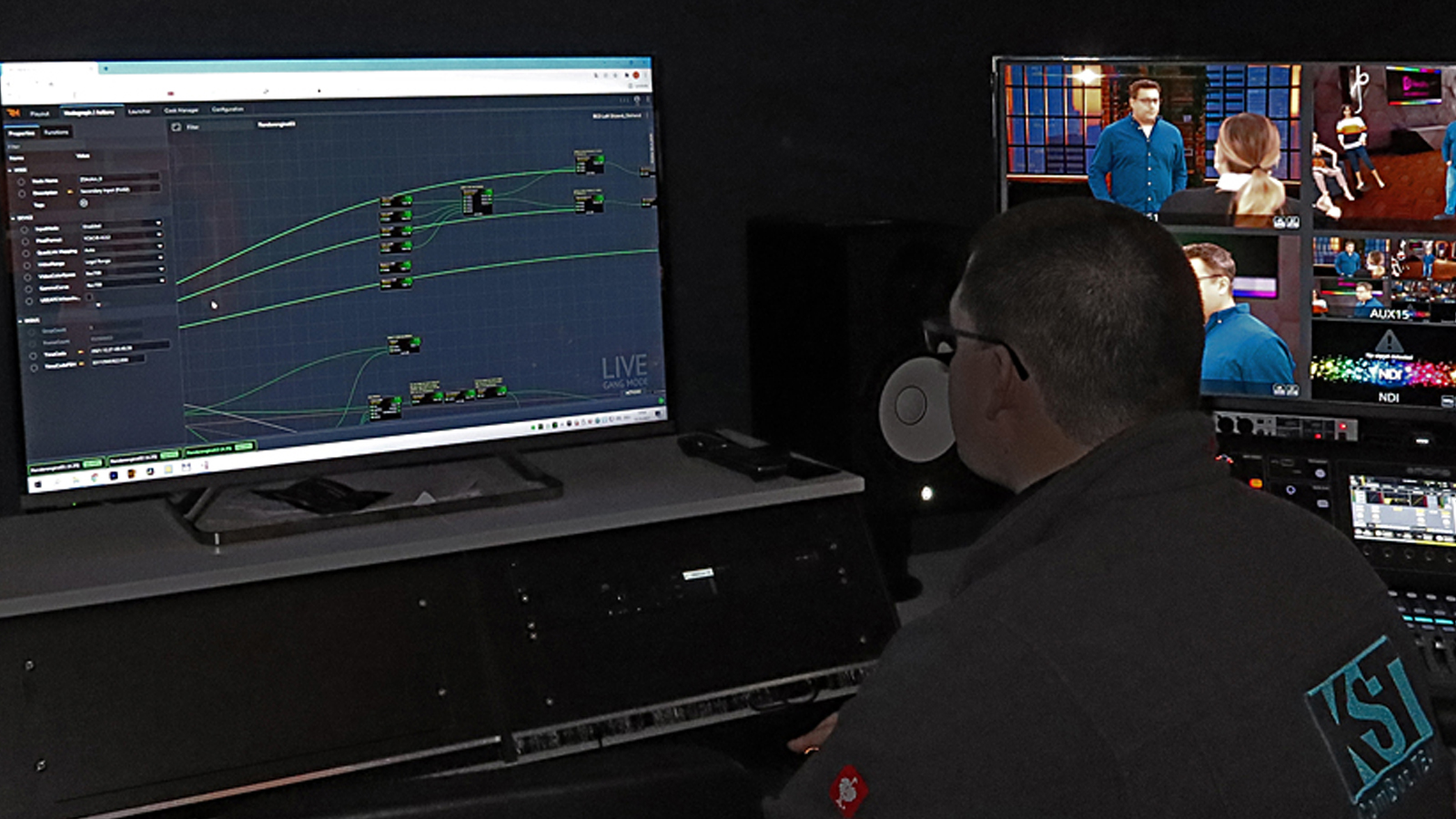 Video-wise, many devices are linked via 12G and via NDI, but overall this is an ST-2110 installation. Here, MediorNet components from Riedel are in use, but also devices from Aja, interfaces from Avid, as well as measurement and reference technology from Leader – and several other “odds and ends”.

Therefore, in addition to video, there are, of course, also comprehensive IT networks, for example with powerful 100-GBit switches from Melanox and KVM components from Adder. In the production room, the only visible parts of the production automation are the touchscreens with the operator GUI (CamBot-Remote) and the control panel (KST-CBR-RP1). The automation power is provided by the CamBot-Control software, which runs as a backbone on the central Linux server system. The most prominent component in the audio area is a 32-channel audio mixer (M32Live from Midas) in the production room.

“We wanted to have a virtual studio that matched our requirements in terms of technology and workflow. KST was able to show us concretely what was possible in its Innovation Center. That was the ideal way for us to get started. Afterwards, we sat down together and discussed what should happen. Then the whole thing was planned through, and KST ultimately built us a ‘turnkey virtual studio’ tailored to our needs, i.e. a turnkey system from A-Z,” explains Dominik Stoecker.

Axel Moschkau adds: “We have built 14 virtual studios of different sizes and equipment in the past 18 months or so, so we were able to design and customize the right studio for IFM within a short time, as if in a modular system. The ideal components for each were identified and tested in advance in KST Innovation Center, or – if not available on the market – specially developed.” 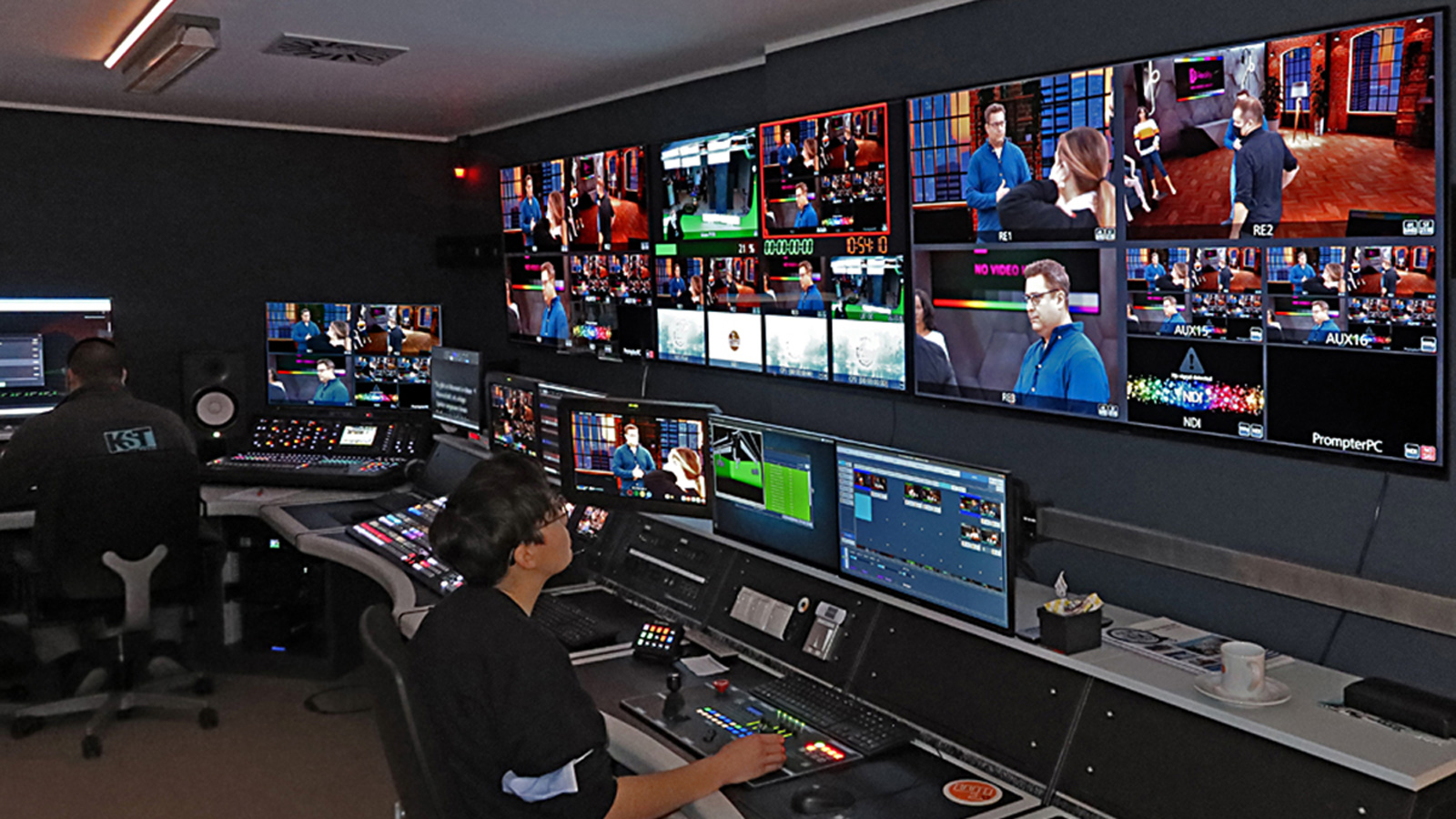 “On the one hand, we wanted to offer our employees an appropriate, state-of-the-art form of presentation in internal communication. And of course, there are now also many possibilities for us in external communication, for example with partners, in public relations, in product presentations.” Dominik Stoecker summarizes, adding: “We already had a smaller webcast studio in-house, but now wanted to step up to a new level.”

“The outstanding keying and compositing of the Unreal Engine-based Reality system allows the presenter to immerse and interact with the virtual world as deeply and realistically as desired.” explains Axel Moschkau, and continues: “The system, designed for ST2110, NDI and SRT signal processing and set up with the three robotic VariCam-LT cine cameras, offers the possibility to realize complete TV productions with a minimum of manpower by using CamBot production automation.”

Axel Moschkau emphasizes how well the studio’s individual components harmonize: “The interplay between Kairos, CamBot and Reality is almost optimal. We can perform closely interlocked automations here, triggering even complex production sequences in a precisely timed and repeatable manner at the touch of a button,” he explains, summing up, “This means that we have now also implemented a state-of-the-art, IP-based and highly automated UHD virtual studio as a turnkey system at IFM in Essen.”

“In order to further deepen our design options while at the same time further refining the automation, we commissioned KST to integrate another talent tracking system in Q1/2022,” Dominik Stoecker explains. KST retrofitted the desired talent tracking system, using components from EZtrack and Antilatency.

A major change has also already been decided: IFM will move its headquarter within Essen in a few years, and then the studio will also relocate – but by the time that happens, the company will certainly have realized many productions in its new virtual studio.