The broadcast and media technology industry sectors are enormous, covering everything from cameras and studios through to network technologies, post-production services and live streaming video. Last year we saw incredible advances, with the wider availability of machine learning and Augmented Reality (AR). These developments promise a new wave of automated production processes and the upward rise of virtual studio technology.

Augmented Reality and virtual studio technology changed the face of broadcast television in 2019, through the creation of virtual objects within a live studio environment. We saw photorealistic representations of football players during a match build up or a journalist standing in digital representations of parliament as voting occurred during an election. This year, thanks also to the rapid development of 5G technology, will see AR being used more in studio setups, especially in the sports broadcast environment with the 2020 Olympics on the horizon. Virtual set solutions, powered by games engines, proved a big draw for the live broadcast as well as the scripted broadcast markets. The fusion of games-engine renders with live broadcast has taken virtual set solutions to another level with photorealistic 3D graphic objects appearing indistinguishable from reality. The technology is not only being used in existing studio set-ups, but is spurning new growth in the studio facility market worldwide.

One example is dock10, United Kingdom’s leading television facility housing ten television studios offering a wide range of production services, who recently chalked up a new milestone with its latest virtual studio capability. dock10 called in Zero Density, providers of the cutting-edge product Reality Engine, to power the brand-new 4K UHD virtual studio housed in MediaCityUK and used by shows such as BBC Sport’s landmark show Match of the Day (MOTD). The soccer show draws around seven million viewers each weekend and BBC Sport has gone on-air with said virtual studio capability as of August last year. MOTD2, Football Focus and Final Score will also broadcast in the same virtual studio. The studio has five Reality Engines deployed on five cameras (three pedestals, one crane and one railcam).

Founded in Istanbul in 2014, Zero Density is an international technology company dedicated to developing creative products for the broadcast, augmented reality, live event and eSports industries. The founders, who shared a common background in broadcast and media, came together on a mission to use their creativity to develop innovative virtual production solutions for live broadcast. The company’s headquarters remain in Turkey, but the company now has an extensive network of clients all over the world. Zero Density offers the next level of virtual studio production with real-time visual effects. It provides Unreal Engine native platform, Reality Engine, with advanced real-time compositing tools and its proprietary keying technology, Reality Keyer. Reality is the most photorealistic real-time 3D Virtual Studio and Augmented Reality platform in the industry.

Another adoptee of Zero Density technology is Sky News Arabia (SNA), who have employed the latest virtual and augmented reality technologies as part of a massive editorial and technical revamp aimed at staying at the forefront of news reporting.

Sky News Arabia (SNA), a joint venture between Abu Dhabi Media Investment Corporation (ADMIC) and Sky Limited, recently completed an editorial overhaul with a fresh line-up of presenters and a special selection of digital-only programming. The revamp saw the launch of one of the most advanced newsrooms in the region, with the addition of a brand-new wing that is now home to Studio B, a 400sqm studio boasting the UAE’s largest chromakey background at 15x11m. The large chroma area gives the broadcaster ample room to use a lighting grid for keying objects in positions where the presenters are on the VR set. The facility also includes an outdoor landscape set designed for the morning show. In the US market, Zero Density partnered with The Weather Channel Television Network to be a virtual studio technology provider for immersive mixed reality content late last year. The Weather Channel chose the latest technology to create awareness among its audiences with visually-striking disaster scenarios. Zero Density’s hyper-realistic graphic renderings and Hollywood-level visual effects are used to communicate the vital message of the channel to their audiences more effectively. 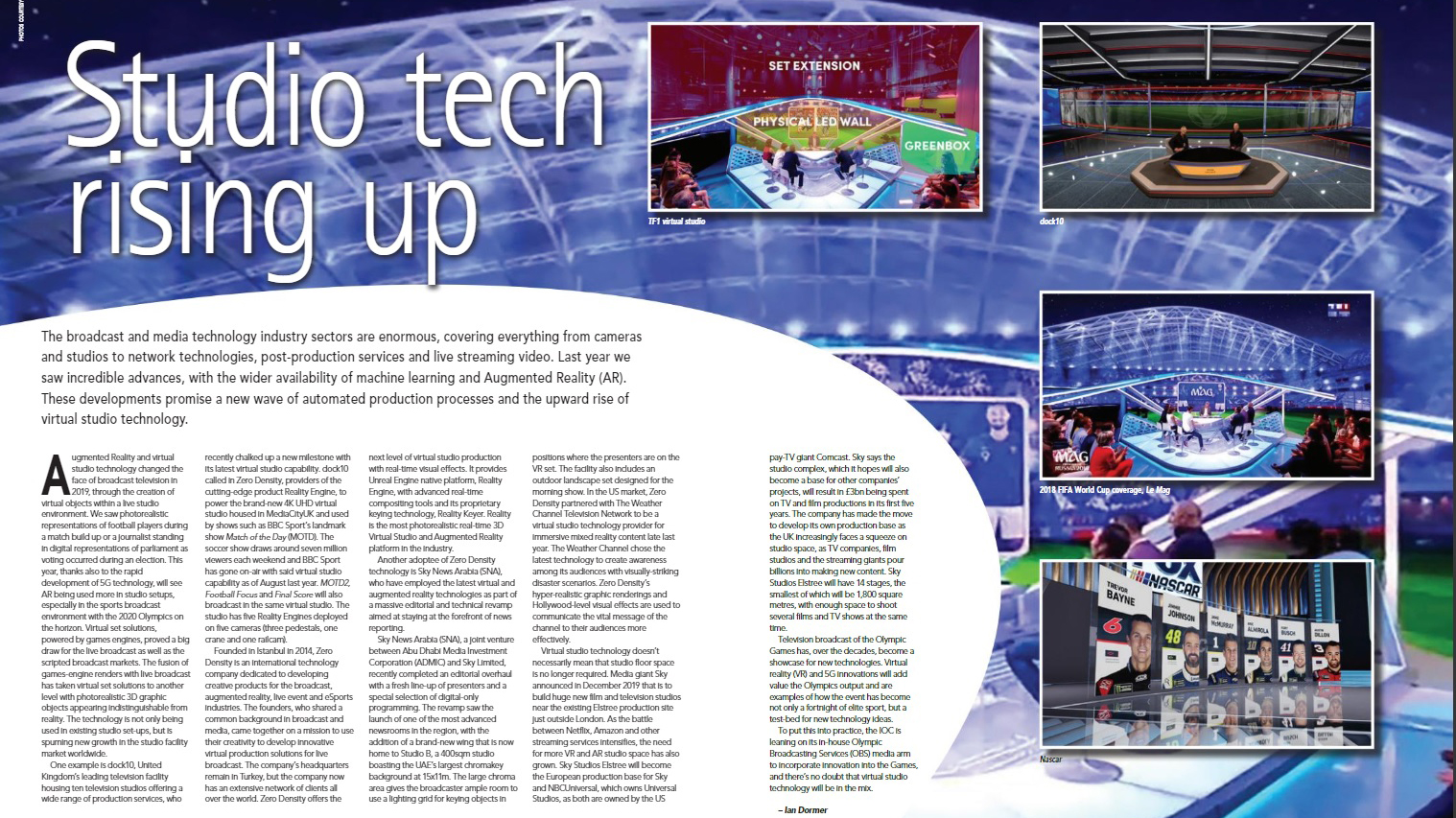 Virtual studio technology doesn’t necessarily mean that studio floor space is no longer required. Media giant Sky announced in December 2019 that is to build huge new film and television studios near the existing Elstree production site just outside London. As the battle between Netflix, Amazon and other streaming services intensifies, the need for more VR and AR studio space has also grown. Sky Studios Elstree will become the European production base for Sky and NBCUniversal, which owns Universal Studios, as both are owned by the US pay-TV giant Comcast. Sky says the studio complex, which it hopes will also become a base for other companies’ projects, will result in £3bn being spent on TV and film productions in its first five years. The company has made the move to develop its own production base as the UK increasingly faces a squeeze on studio space, as TV companies, film studios and the streaming giants pour billions into making new content. Sky Studios Elstree will have 14 stages, the smallest of which will be 1,800 square metres, with enough space to shoot several films and TV shows at the same time.

Television broadcast of the Olympic Games has, over the decades, become a showcase for new technologies. Virtual reality (VR) and 5G innovations will add value the Olympics output and are examples of how the event has become not only a fortnight of elite sport, but a test-bed for new technology ideas.

To put this into practice, the IOC is leaning on its in-house Olympic Broadcasting Services (OBS) media arm to incorporate innovation into the Games, and there’s no doubt that virtual studio technology will be in the mix.