*This article was originally published in FEED Magazine March issue.

Ever since Zero Density opened its doors in 2014, the company has gone from strength to strength. In 2016, the team launched Reality Engine, its Unreal Engine-native, node-based compositing system. Three years later, the company demoed the industry’s first real-time, ray-traced virtual studio with Nvidia, Fox Sports and Epic Games. Just like that, Zero Density grew from R&D start-up into a major software provider of real-time virtual sets, with clients including BBC, Canal+, Sky News Arabia and RTL Group. Then, 2020 happened.

As the whole world was suddenly forced into going virtual, Zero Density channelled its high-end compositing power into helping others smooth the transition.

“Throughout the challenges of last year, we aimed to cater to each client’s needs as a partner, rather than purely a software vendor,” explains business development manager at Zero Density, Onur Gülenç. “We worked hard to ensure broadcasters faced minimal disruption in this new, remote industry.”

The first step was to open Zero Density’s Hollywood office. This enabled the company to expand its offering to a local customer base that was increasingly implementing live, augmented and virtual reality productions. With the office, Zero Density could not only provide customers with out-of-the-box virtual studio systems, but also on-site supervision and technical consultancy.

“We wanted to put our tools into the hands of creatives everywhere,” says Zero Density’s head of communication, Birim Yamanlar. “This resulted in two major product launches: the free-to-download Community Edition of Reality Engine and our revolutionary new RealityHub.”

“RealityHub is the first solution available on the market capable of letting broadcasters create both photoreal AR and virtual studio graphics, as well as automated, real-time overlay CG elements directly in Unreal,” explains Gülenç. “It brings a significant upgrade to all broadcast graphics, from channel branding, lower-thirds and full-screen infographics to sport and news tickers.”

RealityHub also provides an HTML5 user interface to access all other products in the Zero Density ecosystem, so users can control, customise and monitor graphics from their phone, tablet or laptop.

RealityHub has been so successful that Zero Density just launched a full commercial version specifically for high-end multicamera productions, alongside the non-commercial free download. Two major clients – The Weather Channel and Star India – have integrated the early versions of the solution into their professional broadcast workflows. The team’s US expansion has also been a success and Zero Density is opening a New York office to provide further services to North American clients later this year.

“We pride ourselves on working very closely with both existing and potential customers, in order to develop our technologies in a way that real broadcasters want,” concludes Gülenç, who has moved to New York to launch the new office. “With RealityHub, we’re proud to have done just that by expanding our Reality suite towards broadcast graphics, while also ringing in a new era of better-connected, automated and modular real-time virtual production. And this is just the beginning.”

Learn more about RealityHub and download the Community Edition at zerodensity.tv/products/reality-hub 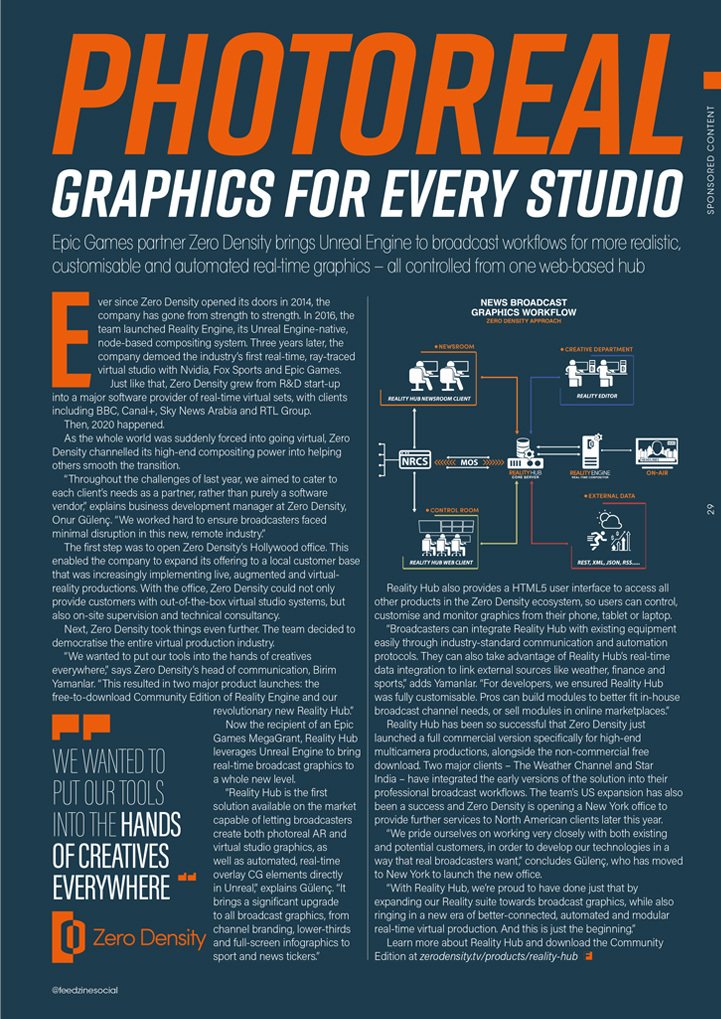